(1) First the text is found to be John 8:14b-21. Since we have 50 consecutive half-lines spanning eight verses (and nothing else), the page is identified as belonging to a continuous-text papyrus with near-certainty.

(2) The columns can be seen to be left-justified, with very even placement of letters, and no spaces between words, except occasionally spaces are used to mark verses (16, 17 fall at a line-end, whereas 18, 19, falling mid-line, have a full space). The uneven right margin may be the result of copying in syllables; there doesn't seem to be a strong effort to avoid word-breaks, since there are six word-breaks in 25 lines (20% of the time).

(3) From knowledge of the text and layout we can determine average line-width (13-14 chars/line), and from extant line-ends, we can determine start of next line (and vice versa for visible line starts on recto side).

(4) A normal set of Noma Sacrae (Abbreviations of Sacred Names) seem to be used, with "Father", "Jesus", and even "Man" (ανων = ανθρωπων, line 22, side a): We know this because there isn't room for ανθρωπων in full here. Noun Cases are distinguished (πρα for Πατερα, line 09, side b, which helps reconstruct line 07).

(5) An initial difficulty in reconstructing the first 3 lines (v14) is resolved by recognizing a simple Word Order Reversal (W.O.R.) of two phrases, η μαρτυρια μου / αληθης εστιν. Since the change has no effect on the meaning of the verse, it is likely accidental. Internal evidence favours the reading here as opposed to the TR, the likely cause initially being a short homoioteleuton error, corrected by insertion afterward of the dropped phrase (since sense isn't affected, erasure wasn't needed):

This process is a one-way process.  Had the TR order been original, the homoioteleuton error would have omitted both phrases, and no word-order reversal of these two could occur.

Longer homoioteleuton were minimized by switching to narrower columns (shorter spans). Shorter homoioteleuton are still possible regardless of line length, and were of concern. It is possible that the Word Order Reversal, once made, would be preferred since homoioteleuton is now less likely (with narrow columns). In this case, the editors of the Textus Receptus may have deliberately chosen the switched reading to avoid future errors, since the sense is not affected. From this example we can appreciate that even many W.O.R.s are really just partially corrected homoioteleuton.

(6) On line 10 of side a we see a short-form horizontal line in place of the (moveable)-N. This also seems to help fix the date to the 3rd century or later, as it was a scribal practice for ends of lines, often oblivious to any concept of adding N before vowels. This was a favourite technique of scribes who produced MSS like Codex B and Sinaiticus. So it may very well indicate a later document, i.e., 4th century.

(7) Turning to Side b we find three more cases of apparent homoioteleuton:

Although these cases appear in the reconstructed half of the column, they seem reasonably likely, because our copyist rarely extends a line more than one letter beyond lines nearby. Instead, he drops to the next line rather than cram, and gives each letter plenty of space for readability.

In summary, we find evidence of about 4 cases of homoioteleuton in 8 verses, with a rate of about 1 such error every other verse. About 3/4 of these however, seem to be errors copied from previous documents. This suggests that while copyists are more careful than they appear to be, errors of omission tended to accrue and build up at a rather alarming rate. This seems typical of 3rd century copying practice, and wasn't brought under control until new copying techniques and better proof-reading was enforced. 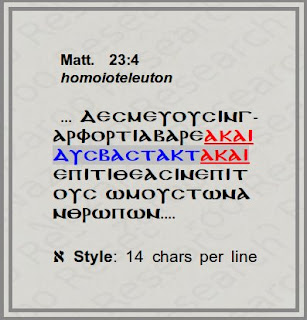 Well, there is a difficulty here; photos are compressed so much and displayed so small, that they are hardly worth viewing, except as quick thumnails. This will make it difficult to discuss MS evidence and illustrate it with good pictures. We will have to limit discussions and/or provide external links to photos and charts etc.