Here is an example of some interesting volumes that others might want:

I had a friend in printing trim some of these books, and I rebound them.
Other than minimal (expected) foxing, and slight waving of textblock,
solid, like-new condition.  8vo quarter-leather new front/back and endpapers: 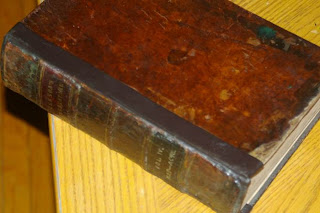 This came to me like an ancient spellbook (its also huge but surprisingly light);
I restored the Spine and board connections with leather, reinforcing with heavy linen and stitching, and lacquered the boards.  I used minimal intervention here to preserve the look and feel. 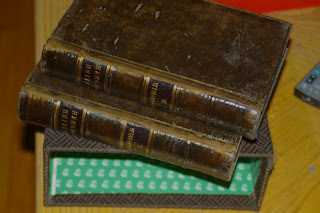 This is the definitive Greek NT (GNT) with extensive notes in English for the 1800-1850s.  These were varathaned and only hinges were reinforced with carpenter's glue.  Great shape for their age, hardly read if at all. 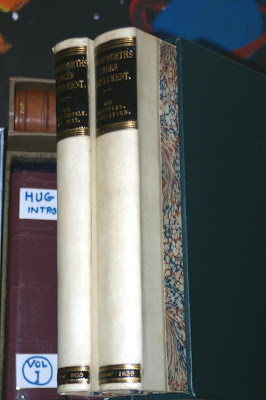 This is the rarest of rare editions of this 7-edition run.
That white is real virgin-vellum, an expensive fad never to be reproduced again.
Crappy 2 vol. sets of this book (without the vellum) are typically priced between $200-800 AM. The vellum is like new, and so are the volumes. Heavy gold titling.
I loved these so much I built a box for them. The golden age of British NT scholarship, never to be repeated.

If you are interested in any of these lovely books, leave a note below and/or email me at mr.scrivener@yahoo.com.


The Compleat Griesbach ! -
Recently strengthened and rebound in full leather, ready for gild-lettering. 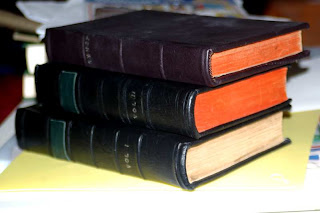 Volume 1:  The Four Gospels (1818) Greek NT with Critical Apparatus
This is Griesbach's final edition, with complete corrections and updates.  The best edition for the gospels.  For this final printing, the column format was switched, with the Greek text in a single column, and the dense apparatus in two columns for easier reading. 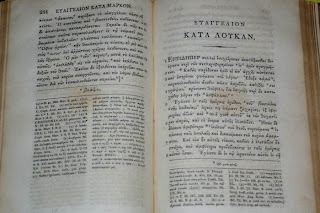 Volume 2: Acts to Revelation (1806) This is a rare copy, originally owned by Ezra Abbot, chair of American Revised Version committee, and gifted to the Bowdoin Library in the 1880s.  It has his own handwriting in the front endpaper.  A historical treasure.  It became a discard (withdrawn) and ended up in the open used book market. 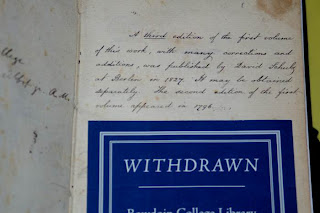 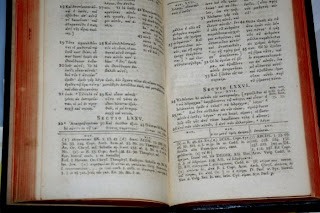 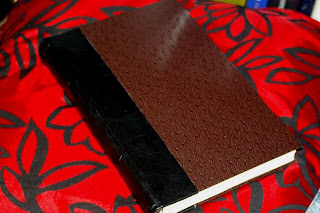 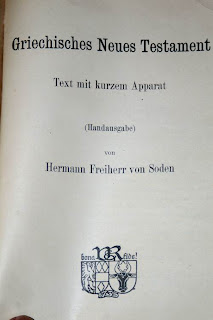 This is not a mere 'student's edition', although marketed as a paperback edition.  It is a very nice printing on high quality paper, with excellent fonts.  The apparatus is very full, considering also von Soden's densely packed system of notation. 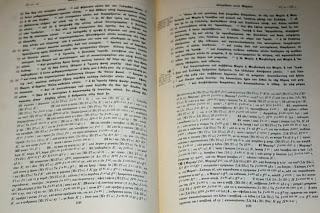 This works nicely alongside Merk's apparatus, which is largely a translation of von Soden's with a few updates (von Soden's is actually far more detailed).  The signatures have been completely restitched with strong binding-thread and it has been handsomely rebound in 1/4 leather and buckram.   Durable working copy for research. 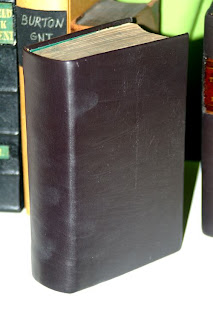 This two-volume-in-one Academic edition (138 page prolegomena, vol.1 = 422 pages + vol.2 = 474 pages) is not like the many later student's editions.   Its a massive amount of apparatus crammed into a small 8vo size. 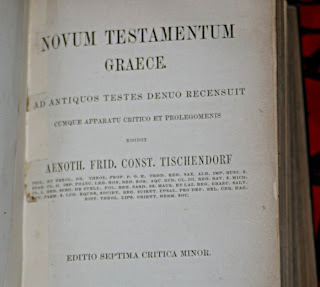 Recently rebound and reinforced in full leather with new endpapers.  The first two title pages were repaired using contemporary paper and minimal intervention.  The rest of the textblock is solid and durable. 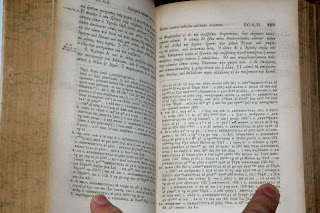 The text of the 7th edition is superior to the 8th, because it was constructed along more conservative principles, before Tischendorf went gaga over Codex Sinaiticus.  The textual apparatus for both is largely the same, with Sinaiticus making the only significant difference. Like all true printed copies from this 'run', the first few quires (Matthew) suffer from extensive, (but not dark) 'foxing'.  Foxing is caused by contamination of the paper by iron during manufacture.  It is not mold or mildew, but a rusting effect.  It cannot be removed, but does not spread, and in this case is not dark enough to interfere with reading the text at all.   The rest of the NT text is clean and only suffers normal yellowing.